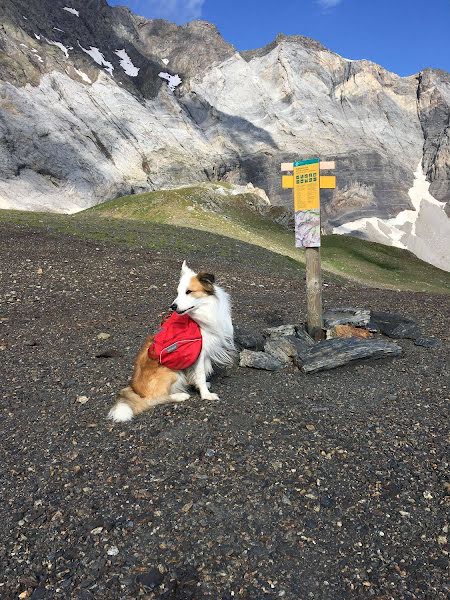 From King of the Mountain to Swimming Champion

I may need to disappoint you from the start: this title does not refer to my voluntary communication silence of the past month (see my previous inspiration) but about our holiday experience with our loyal four-legged companion. He never ceases to amaze us, this dog of ours.

The first two weeks of our holiday it looked as if he had been climbing mountains for all of his two-year life. With his little red dog backpack we saw him running effortlessly up and down the steep rocky paths. Even fast flowing mountain streams were no obstacle to Django. He casually jumped from one rock to another and fearlessly waded through small rapids. But he really emerged as a true lover of great heights when he needed to cross snowy patches. With great enthusiasm he plunged through the eternally frozen snow, which must have felt like heaven to his heated paws. And then the big moment – a mountain animal that made his hunting instincts run into overdrive: the marmot. Whenever he spotted one of the bever sized rodents, often before they sounded the alarm by whistling loudly, he shot away like an arrow towards his prey.It was as if those two kilos of dog feed in his backpack were weightless. We felt anxious when we saw that red spot growing smaller with enormous speed and disappearing behind a rock. Luckily those marmots are the true kings of the Pyrenees and Django never managed to catch one.

The second surprise happened in the last week of our holiday, which we were spending in the Cévennes, along the banks of the Gardon. Up until then Django could not be persuaded to swim. He enjoyed standing chest-high in the refreshing water and he did not seem phased by crossing fast flowing rivers, as long as his feet – or rather paws – felt solid ground. And suddenly he started swimming of his own accord. A bit hesitant at first, but after a few days it evolved into a true hobby. He merrily paddled around, like a puppy seal with his head just above the surface, sometimes biting at air bubbles or catching sticks we threw at him. See the enclosed clip to prove the case.

He seemed to fully enjoy both new experiences and environments, not hindered by worries about potential danger or threats or assumptions like “what if” or “do I look good with this little red back pack?”. Just living fully in the moment as animals can do. Being more “in the moment” is what this detox from media and communication technology has brought me during this holiday (I kept my promise!). I feel like I have spent more non-fragmented time with myself and I quite enjoyed it. During the classic ‘dead’ moments I did not reach for my smartphone to check email or social media updates. I sometimes read a book but mainly I was just present with what and whom was there at that moment at that place.

I also suddenly felt like drawing what I saw – the mountains and rock formations, the contours of a mountain village, the picturesque chimneys on the roof of the building underneath our terrace. I bought a sketch book and pencils and took up an almost forgotten hobby (during my ‘younger years’ I drew and painted a lot). How great it felt to try and transfer what I saw into lines and volumes. Moreover, I was no longer really interested – like in the old days – to create a perfect reproduction or esthetically beautiful image. Just watching, enjoying and putting the lines on paper was so incredibly relaxing. A completely different way of doing and being simultaneously. I did something that I often used to do – and that I gave up just as often, frustrated, because it was ‘not good enough’ – but it felt completely different this time because I was completely different. Not worried about achieving a result or making an impression with my art. Just being completely in the moment, like our dog in the water, no more and no less. Pure bliss.