How Dog had a breakthrough – a contemporary fable (part 2)

If you want to understand how Dog ended up doing what he did, you should read what happened previously in my inspiration How Cat and Dog should follow the example of Mouse, a contemporary fable.

So now Dog had a fair insight into his problem. He could clearly see what was going wrong, but it did not really result in any constructive action. He had to change tactics, and unwittingly (after all, how could he possibly have known) he followed the example of his room mate Mouse.

This he knew for sure: he sincerely longed for a harmonic, even loving cohabitation with Cat. That was the change he passionately wanted to achieve. He longed for an animal playmate, an ally in the midst of this pack of human creatures. In practice he had not been very successful – quite the contrary – and his relationship with Cat was very unpredictable.

If he was very honest, he had to admit that it frightened him to do the opposite of what he was doing now – in other words, not to go chasing after Cat when the feline walked through the living room. When he gave it some further thought, he realised that it was mainly Cat’s movement that triggered him – especially when Cat moved swiftly.

He really tried to imagine what would happen if he would not follow his dog instincts blindly. The thought alone made him slightly queasy. After all, he belonged to the Border Collie breed, he was a proper herding dog. It was in his genes. If you saw movement out of the corner of your eyes – say a sheep wandering away from the herd – you jump up immediately and go after it, without thinking. The pride and honour of the breed was at stake – at least, that is what he had always thought. And it was exactly this instinct that was causing these issues with a cat, of all creatures.

His conscious goal to change was competing strongly with a much more subconscious and apparently stronger impulse. And the subconscious cannot be fought or changed. Because of his sharp mind, he had come to that insight after long thought.

So what now? He decided to gather some more information first to test if his assumptions were correct – if it was really true that a Border Collie can only respect himself when he chases after everything that moves in his line of vision.

Firstly, he made a conscious effort to see Cat in a different light – no longer as an annoying creature, but as a peer with his own right of being, just like him. He just needed to flip a switch in his head. That seemed to work quite nicely. Nothing catastrophic happened because he changed his mind. He was also not ashamed. His owners still loved him just as much. He even thought that he saw Cat looking at him affably, rather than in his usual dark way.

Then he had lain down a few times close to Cat, quietly. That had been most exciting as he feared it might have ended badly, with Cat hissing and growling again – but that had not happened. His assumptions about dogs versus cats proved to be unfounded – check.

Now only the big test was left: not to chase after a moving cat. The previous two actions had changed his perspective in such a way that he felt fine about that test, and also confident that he could change, slowly but surely. So his goal suddenly seemed very close.

Did you find this fable – and the previous one – inspiring? Do you see goals for change for yourself, that you cannot seem to realise? There is hope. Together we can map what is keeping you from making permanent changes. Just like Dog you will be ready to test your big assumptions with small actions. These can be very different issues, on a personal or professional level. Even teams or organisations can be faced with a serious immunity problem that stops real change from happening. Contact me for a free session and make your own breakthrough come true. 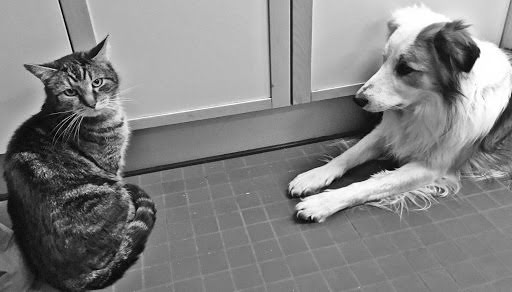 Ancient Wisdom as a vaccine

In De Standaard of 21 April (one of the major local newspapers) there was a beautiful article entitled "Art as a vaccine in the post-corona era". Why wait for that post-corona era? Yesterday the parable "This too shall pass" ended up in my mailbox.

"Insanity is doing the same thing over and over and expecting different results”. Humans excel in that. We somehow believe that if we keep trying harder we will ultimately succeed, even if we keep ending up with the same result, time and time again.

From King of the Mountain to Swimming Champion

What if email, mobile phones and social media did not exist?

Why not take a mini-holiday

How Cat & Dog should follow the example of Mouse, a contemporary fable

A juvenile delinquent dog or the price of adulthood

When we reach the age of adulthood we seem to have internalised all those responsibilities, expectations and limitations. As if the free creatures that we once were are forgotten.

Who is the King of Creation?

What if things were different from what we have always assumed? It can make you feel very unsafe to question your normal perspective. On the other hand it also offers incredible freedom and creativity to step outside the beaten track and become curious.

From prey to predator and vice versa

From prey to predator and vice versa, the natural order put upside down. The animals themselves do not seem to be bothered by it - for sure Django isn’t, and the hens appear to find it quite normal to be on top of the food chain.

How is your Monkey Mind?

We all have a Monkey Mind, Buddha said, with scores of monkeys, all demanding attention. The fear monkey is the loudest of them all, he is constantly ringing the alarm bell, drawing our attention to things we should be wary of and to everything that can go wrong.

The parable of the businessman and the fisherman

We always have a choice: do we listen to our sabotaging inner voices or do we opt for what we really want, like the fisherman?

Mr Goldberg and his assumptions

It is worthwhile to take a closer look at the assumptions you have about the persons with whom you have a relationship. You could develop the habit to ask yourself if a certain assumption is really true. And what if it is not?

Asking for help is something we struggle with and we will only ask when we have no other option. We believe that asking for help and putting ourselves in a vulnerable position is a sign of weakness. Asking for help creates a warm connection between the asker and the giver.

Asking for help is something that is hard to do for a lot of us. Self-reliance and autonomy are highly respected in our individualistic society. Another aspect of asking for help is that we build up a 'debt' as it were, We also do not like to disturb others with our problems